Today I downloaded the TurnKey WordPress Appliance to see if it's a good source for my WordPress Dev environment. When I tried to deploy the appliance I got the follwoing error message:

The specified operating system identifier " (id: 95) is not supported on the selected host. It will be mapped to the following OS identifier: 'Other Linux (32-bit).

After I have confirmed the message with YES I could deploy the appliance without any other errors. I was interested why the OS was not supported. I searched on the TurnKey website for the core OS which is used for the appliance and found out that it is Debian 6.0.5 (Squeeze), which should be supported by vSphere 5.1. When I opened the vSphere Client and tried to set the OS to Debian I realized that there is only Debian 4/5 in the dropdown field. I was thinking that maybe I can change this only through the Web Client such as other things only working in the Web Client. I logged into the Web Client and tried to change the OS version there, but according to the following screenshot it wasn't possible.

There is a VMware KB article which discribes why you can'tchange the Guest OS and Guest OS version in the Web Client. If you use the vSphere Client it is possible to change these values.

Why this behaviour is only in the Web Client, only VMware knows.

But back to the other problem. Why can't I change the guest OS to Debian 6? I did some testing with HW version upgrade and was looking at the XML file from the error message above.

After I changed the HW version to 8 I could select Debian 6 as a supported guest OS. 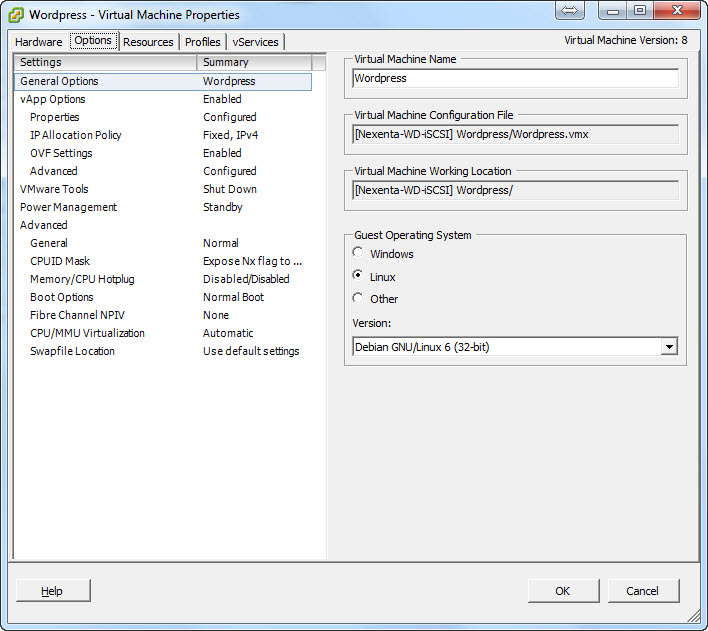 That brings me to the conclusion that this OVF was created with VMware Workstation, which supports Debian 6 as guest OS and Hardware compatibility mode "Workstation 6.5-7.0 virtual machine", which is vSphere HW version 7.

You can find HW version and supported VMware products here.

Imported into a vSphere 5.x environment it says that it's an unsupported OS because of the HW version.