In my last post I had a problem with the onboard 10GBit NICs. My assumption is that they were overheated and therefor failed. I read some blog posts of other blogger and some of them experienced the same issue much earlier.

Because of that I bought a Noctua NF-A14 FLX double pack in the hope I can reduce the temperature in my cases. I don’t know how hot the passive cooler of the 10Gbit adapter was but it was approx. over 70°C or higher.

To get the right position of the new fan I read through some article describing the correct air flow. I came across a really cool article from Tom’s Hardware which explains how to position a fan for optimal air flow. The following picture was taken from that article to explain what I have done. 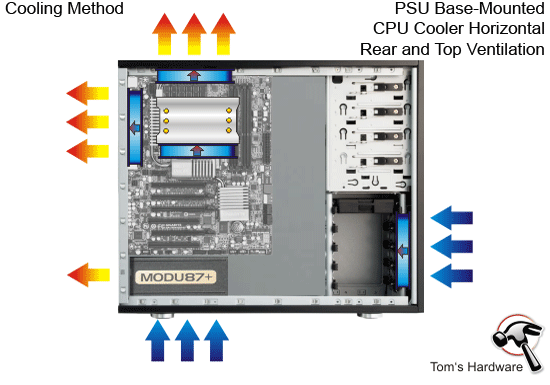 My current build of the server was exactly as shown in the picture, except the fan at the top over the horizontal CPU cooler. I thought this fan doesn’t make any differents or only minimal.

I have checked the temperature sensor of the mainboard through IPMI before and after I installed the fan and these are the results:

As you can see the results are pretty awesome. Installing the fan drops the temperature in almost every sensor by a minimum of 15%. Only the peripheral temperature went up. I can only explain it that I haven’t waited some time when the host was powered up before I took the snapshot of the sensors. The fans I have bought are not cheap but worth the money.

I hope that with the new fan the problem from this post will not occur anymore.