Virtual SAN 6.1 was announced today at VMworld US. Starting with VSAN 6.1 the product cycle is decoupled from the vSphere release cycle. This means, as with VSAN 6.1, a new VSAN version was released independently of a major vSphere release. I’m really excited about this release because there are a lot of new and cool features included.

Starting with VSAN 6.1 you can now stretch your VSAN Cluster (Datastore) across 2 sites with a witness at a 3rd site.

Stretched cluster is based on Fault Domains which where introduced in VSAN 6.0. Because there are only 3 FDs (Site A, Site B and Witness site) the maximum failure to tolerate (FTT) is 1. The witness VM can run either at a 3rd site or in vCloud Air. For more information watch out for Cormac Hogans blog (www.cormachogan.com) I assume there will be a lot of information about stretched cluster soon! 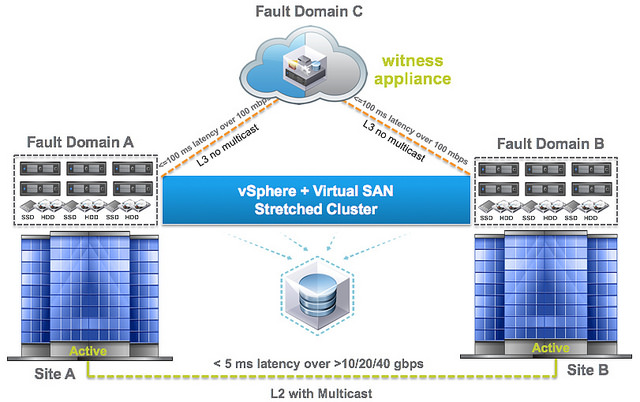 Virtual SAN for ROBO is based on Stretched Cluster and it’s now possible to create a 2 node VSAN cluster with a witness VM running in your primary datacenter. 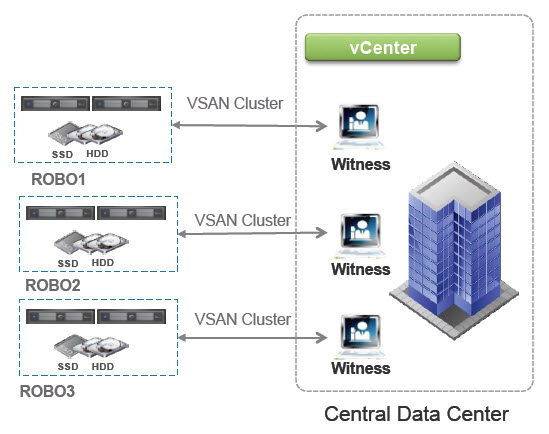 When using vSphere Replication with VSAN datastore you will now have the option to select a RPO of 5min instead of the default 15min. This can only be done withVMs residing on a VSAN 6.x datastore. VMs residing on normal datastores will not have these option available.

NVMe – Non-Volatile Memory Express (NVMe) is a new communications interface developed especially for SSDs allowing for greater parallelism to be utilized by both hardware and software and as a result various performance improvements. Leveraging NVMe in a Virtual SAN all flash deployment resulted in 3.2M IOPS measured on a 32-node cluster – ~100K IOPS/Host.

In VSAN 6.0 there was a Virtual SAN license based on CPU or VM (Virtual SAN for Desktops) and an add-on license for All-Flash. In VSAN 6.1 there are now 3 license options available.

Virtual SAN Standard and Advanced is licenses per CPU or per CCU, ROBO licensing is per VM in a 25 VM pack and is limited like the ROBO bundles to 1 pack per remote site.

Virtual SAN Advanced will be also included in VMware Horizon Advanced and Enterprise.